So I gave the long lens shots of the moon another try tonight, and I think this one came out a little bit better. The primary differences from the last shot included:

1) The moon was directly over head, putting less dirty atmosphere between me and it.

3) Being directly over head, I simply laid beneath the tripod in a very short (read: stout) configuration, making it less susceptible to vibrations.

4) I did a better job locking all the rings, knobs, and nonsense down before taking the shot.

Overall, I’m happier with these results, but I still think it can be sharper. Not sure what else I can do with this lens other than go out into the dessert (better conditions) or try and mess with its internals and get the infinity focus a little better. Then again, its probably inherently limited by the quality of the glass within and I should just upgrade to a photo mountable telescope… is it Christmas again yet? 🙂

So, as discussed in a previous post (here), my step father gave me his Vivitar 500mm lens and 2x teleconverter when I visited for Christmas and I’ve been looking for an opportunity to get out and play with it.  Last night, one finally presented itself and I went out to take several photos of a nearly full moon.

To recap, I’m putting the 500mm lens, 2x converter, and adapter ring on my Cannon T2i and mounting it on a Benro B1.  Just to prove I wasn’t looking at some super moon or perched atop a great peak, I took a number of shots with my 18mm and 250mm lenses (see those, here).  And finally, as indicated by the 18mm shot, I was huddled among the buildings of my apartment complex (and their lights, more on that in a moment).

The first thing I noticed was that aiming the lens was a lot like aiming a rifle scope, and required “getting it close” looking along the tube until the moon showed up in the eyepiece.  Secondly, the moon moves! (at least when you’re zoomed in ;-)).  I quickly found that I had, at best ~60 seconds with the moon in frame and was repeatedly aiming just above the moon, waiting for it to traverse into screen, and then taking 4 or 5 shots (fewer if I was changing setting and had to wait for the camera to settle) and then readjusting.

Which brings me to the big one…the setup was incredibly sensitive to vibration.  Initially I had the Benro’s vertical post extended fully, but retracted it to the bottom and added leg height to improve the geometry’s stability.  This helped, but ultimately the lens’ length and inertia prove a bit much for a ¼” mount post and shaking is inevitable.  The immediate work around was to use a wireless remote with a 2 second delay and to not use the back screen preview (this puts the mirror down for real time display on the back panel of the camera and results in additional mechanical motion -IE vibration) during the shot.

Even with all of these mods, some vibration could still be seen through the eye piece when the shutter went off.  I’ve read that it is possible to modify the camera settings to fix the mechanical shutter, but I have not had a chance to verify and experiment.  So, instead, I tried cranking up the shutter speed at the price of ISO and F stop… with some success. Notably, the B&W shown here was shot at 1/800 and 3200, while the “yellow” one over in the photography section was 1/200 and 400.  Note, I don’t list the F stop because I was adjusting it manually on the lens and didn’t think to write it down…  (must remember to be patient and thorough, grasshopper)

Ultimately, I got some good shots of the moon for 20 minutes spent depriving  my neighbors of the apartment sidewalks.  That said, they were a little soft.  I think this boils down to two sources; 1) the vibration and 2) I’m not convinced the lens is getting to a true “infinity” focus.  This latter I suspect because the focus ring hit an internal stop before the inf. symbol got to the center f-stop marker and the moon just didn’t seem to quite get sharp in the view finder.

All in all, much fun.  Next steps might include

2) research on if infinite focus is achievable

P.S.  If you like knowing more about the sun and moon and when to look for them in great photo opportunities, I highly recommend the Photographer’s Ephemeris. Available in many flavors, including mobile.  Never leave home without it! 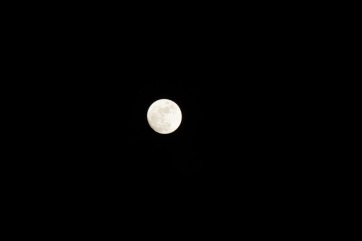 Over the Christmas holiday my wife and I made a trip back east to visit my step father, mother, and her family.  A good time was had by all.  Shortly after arriving, I found myself in a conversation about photography with my step father, a long ago hobbyist back when film was king and you developed black and whites in a small chemical filled room in the basement.

Before long, we were pulling old photos and camera gear from dusty cardboard boxes somewhere in the basement.  After showing me several of his favorite workhorses and his father’s original hand-cranked home video camera (easily the nostalgic crown jewl of the collection), he opened a very long case and pulled out a Tele Vivitar 1:6.3 500mm lense and asked “think this would fit your camera?”

http://camera-wiki.org/wiki/Vivitar_500mm_f/6.3_Compatible_T_System
The short answer was, of course, no.  But being an engineer and having a friend who has enjoyed adapting and shooting with older lenses, I knew that might not be the end of the story.  A quick search on Amazon found the Fotodiox Pro Lens Mount adapter:
http://www.amazon.com/gp/product/B003EB0AXY/ref=oh_aui_detailpage_o00_s00?ie=UTF8&psc=1
$30 and 24 hours later, I was mounting it to my Cannon T2i and fiddling with the settings to get a picture.
The lens has its own tripod mount point and in size, weight, and aim, is more akin to a telescope than a camera lens (which might be why one of my first ideas is to point it at the moon and take some shots… stay tuned!).  While aiming it accurately might get a bit tricky my Benro B1 seemed to hold it just fine.  As you might expect from an older lens, the focus and f-stop adjustments are old school (read: manual). This implies you wont be chasing a fast moving object with it very easily, unless you can pre-plan the capture point along its trajectory.
I didn’t have any great opportunities to point the camera outside (bad weather and other activities ruled) but did spend some time pointing it at some bowling trophies across the basement.  Too close to focus properly, but enough to get some preliminary understanding of if it would work.  Several websites (and my mother, who apparently tried to use it once with her own film camera) noted both significant vignetting and /or difficulty getting enough light to the film.  However, I found that the crop of my T2i sensor (1.6x) was well within the vignette boundary and putting the T2i into preview mode and an ISO of about 400, I could start to get a reasonable image.
Unfortunately that is about as far as I have had the chance to use it, but I have a bunch of ideas already (moon, sailboats, airports, neighbors windows… ).  To make things even more interesting, my step father threw in a Vivitar Auto 2x Custom Tele-Converter (2x-4).  Effectively doubling the lens and adding my camera’s crop effect, thats the equivalent of a 1600mm lens! (I can see the little green men from here! 😉 ).  As soon as the weather clears and a good time and opportunity align, I’ll post some pictures and more on using the lens.
Stay tuned!
-DPH